September 02, 2017
So,
I was all happy and excited, because I'd just gotten a wordpress account and was stalk- I mean, reading Kendra Lynne's posts, when I saw this. 😲

*Sighs and picks up pencil*

Thank the person who tagged you.

Make a picture for the tag-post.

1- How do you decide what a character will look like in your stories?

Hmm.. I don't really. I just think about their character, what role they're meant to play, and sort-of do it off that. I'll give an example:

One of my characters, Dominic, has been searching for 13 years to find someone. He's a vampire, the son of Dracula. He's a bit harsh at the beginning. He has never really liked his parents, and the feeling is mutual. I can't /really/ describe clothes, but he has tangled, uneven and wild hair, red eyes he keeps an umbrella with him at all times, as vampires can't go out in the sun.

2- Do you get excited when you read the descriptions of delicious food in books?

Not particularly.. I don't think I've read many 'food descriptions' in books...

Umm... That's /slightly/ strange. Only reason I said 'slightly' is because I've heard weirder. Trust me on this. If you want to know, let me know and I'll (try to) tell you privately.

But to answer the question, No. I mean, new books do smell nice, but I don't really smell them.

4- Tell me about one scene from a story you’ve written that was based on something that actually happened in your life.

The girl who just spoke? She's Jasminmin, my second eldest sister. She's 13. My sort-of twin sister is Allythefirst, and I swear I saw a Faerie* doing her chores. My eldest sister, Slisby, always in her room,(That means extra chores for me, Ally, and Jas. Just great!) Tinkering with something.. She's always wanted to go explore the stars, but she never tells me why.. Anyway.. I'm folding the clothes (We have a lot of clothes, most of them are hand-me-downs from our mother, Ynga, who can seem to sense what you are doing and when you are doing it. It's like she can see the future!)
“I am not thinking about it”
“Yes you are”
“No, I'm not”
“Stop Fighting again!” That was Ally. She's a peace keeper. Believe me, if she wasn't here I'd be living in the forest with the unicorns. “Yeah, your disturbing my Tinkering!” That was Slisby. She hates noise, and it looks like she even hates this planet. I think that's why she wants to leave. “That's not what I meant! Mother is taking a nap!” Shouted Ally... “Then why are we still shouting?” I asked.. I mean, why were we still shouting when mum's taken a nap and someone is shouting to tell us not to shout? I'm confused.. No one shouted after that.. I love how I'm the most logical out of all of them.. It's funny how they make hasty generalisations and things like that. “Done!” I said and laid the last of the clothing in front of me.

5- A character you’ve created that you absolutely abhor.

*Googles abhor*
Ah.. Um.. I don't think that's ever happened to me, like, I've /disliked/ characters at a certain stage of their growth (Eg; Coal - Seasons and Tjaizlah - Idk what it's called yet.. Slisby Halp, you know what I'm talking about.. 😄) but never a character I've downright /hated/

6- If you could have one of your characters as your sibling, which would you choose?

Ooooh.. Tough one. /Not/ Winter.. Maybe.. Alaska? (Alaska North from another WIP I have☺)
Umm.. OH! I know! Liliana (That's just her name because Idk what to call her) from one of my monster stories.

Yes, I know; I do a /lot/ of things with Magic, Monsters, Mythology, Science, that kinda thing..

*Gasps and then grins*
I would be the most evil cheeky villain who would kill everyone with Tackle-hugs! 😁

9- What type of tag do you enjoy doing the most?

10- What kind of a scene in your writing do you find the hardest to write?

Oooh. Um.
To be honest? I don't really know. I haven't written /every/ type of scene out there, eg; deaths (Yet), So I'll have to come back and edit this post when I think of one.

Oh. Wow. That didn't take me as long as I thought it would. Anyway, that's all from me today. Buh-bye!

Popular posts from this blog 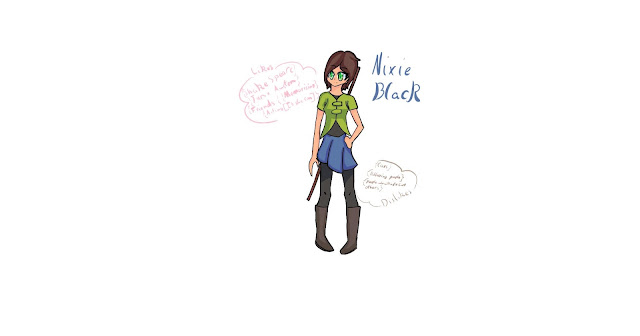 Okay, I'm sorry. I know I said I'd post every week but the pictures took me ages and I may or may not have forgotten how long a week was *cough*
Oh, and these designs aren't finalised, as I don't like some of them. The characters will pretty much stay the same though, cos they're pretty much done..
But yeah. It may still be a few weeks/months before I start, because after I finished the picture of my characters I realised how shockingly bad my drawings actually are, so I need to work on that.
But yeah. Here's Nixie Black, our protagonist!

In case you can't read my horrible handwriting, Nixie likes Shakespeare, Jane Austen, friends, memorising lines and acting (If she can). She also dislikes Cars, bothering people unnecessarily and people who willingly hurt others. She's about sixteen.
I hope you guys like it! It's not the best drawing I've done, but I think it's one of my favourites when it comes to the characters that I drew.

Next one comes…
Read more 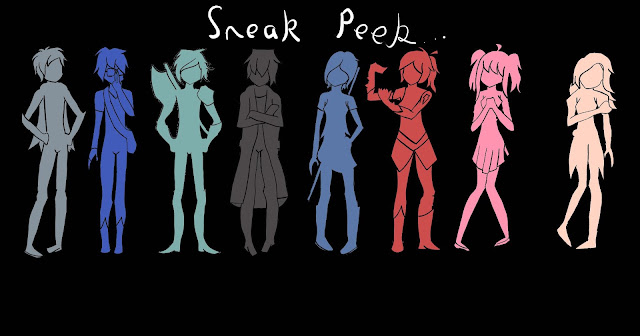 Thank you for the positive feedback; I'm going to go ahead with the comic! It may take me a while to prepare, however. I have to design all the characters, decide what formats to use, etc. I didn't realise until I started to get serious about this comic how bland my characters were, lol. I'm working on it - I want what it's about to be a surprise, but I can put up some stuff that I'm working on, about the main characters...

So, something else I wanted to discuss;

I'm considering writing short stories again .D. Not like, a few paragraphs long, like my other ones. Closer to one or two pages long. I've got an idea for one I particularly want to do, but I need to find my document where I wrote the idea down. I'll post it on here, if you guys would like?

Oh! Also, I'll still be doing art dumps & requests (Geez, I've got a loott of drawing in the foreseeable future)

Sorry, I know I haven't been on at all in the past three (almost four) months. What's happened is;

-I've gotten sick about twice now,
-I also have been hanging out with a bunch of friends,
-I've also also been skipping from one project to the next, cos apparently I'm incapable of finishing/starting anything T~T

But I have an idea.

An idea that may help me actually learn to get things done on time and be super entertaining for you guys.

I'm working on writing and drawing a comic!

I'm not going to spoil what it's about or anything, but I'm working on the story beats, character designs, etc. Hopefully it'll be actually good since I'm not all that good at some parts of drawing, and I'm looking for improvement all the time (sorry if my art style changes a bit, lol.)

So, I was wondering if you guys would like to read it? I'd try to do about 3+ panels a page, one page a month, etc. It may be a leeettlle dark, I don't really know y…
Read more